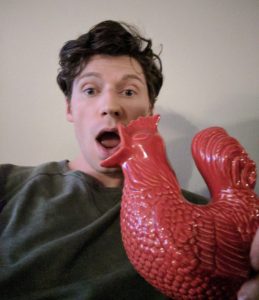 I’m a writer with little regard for polite language, mostly dabbling in the profoundly unpopular literary science fiction subgenre. Sometimes I write creative nonfiction/essays, and holy shit, them are some swearfests. During the long, frequent periods where I don’t write or work hard for the money, I run, row, and approach strangers with cute dogs and never remember the human’s name.

For those that want to go deep into the meaning of literary sci-fi or creative nonfiction, I’ll elaborate a bit. Put on your serious pants a minute here–or maybe just put on pants? Or no pants. Whatever.

If I just say “upmarket sci-fi,” and that means something to you, we’re good. For everyone else, I define literary sci-fi as stories where characters, theme, language, and even narrative structure have more place than most commercial work, which tends to be plot-driven and/or high concept.

Creative nonfiction is basically me writing about misadventures of a small-town boy living in big cities in his twenties. They started out as essays, but I found freedom in story format, because if I somehow have space between me and the based-on-a-very-true story, I can sort of catapult my vulnerability across that emotional moat. If you’re a psychologist and you’re concerned for me, you should totally reach out, because I don’t ever know if I’m doing the right thing.

Currently, I’m working on short stores in the literary sci-fi vein to try out new narrative methods I learned from a certificate program in literary fiction writing at the University of Washington. If I can pull them off, I’ll apply those skills to full-length novels I’ve shelved the past few years. I’m also maybe one more pants-pooping story away from a pretty hilarious collection of creative nonfiction.

I’m a member of a writing critique group called The Papercuts. I shouldn’t tell you about them because they’re the worst people in the world and it says a lot about my character since I’m associated with them. See what shenanigans they’re up to on Twitter and you can check out their bios on this page-a-roo.

Email me! I love notes! david (at) dscolburn (dot) com
I have to write my email that way or Internet robot things spam me about deceased billionaires who left me their inheritances. I hate money!